An event which has special meaning for Flame of Liberty Memorial Artist, Frank Kocian Morris. 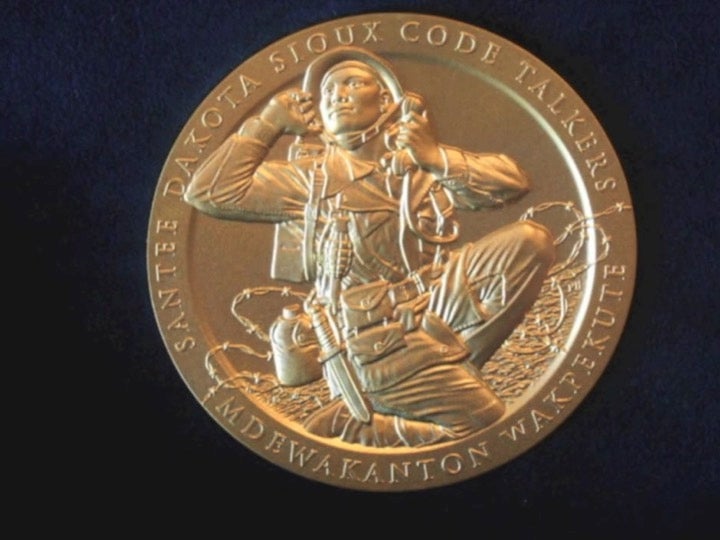 Louis Levi Oakes kept a big secret most of his life. Earlier this summer, hundreds of people celebrated the life of Louis Levi Oakes who passed at the age of 94. Oakes was the last living Akwesasne Mohawk ‘code talker,’ who used his native language for military communications in the South Pacific during World War II. Enemy troops in the Pacific theater were never able to understand the language, and the code talkers were eventually hailed as heroes of the war. They were awarded the gold congressional medal.

Today, the Flame of Liberty Memorial which proudly stands upon the Los Gatos Civic Center lawn, honors veterans, first responders and two local 9/11 heroes. Memorial artist and Master Designer for the U.S. Mint, Frank Kocian Morris, knows a lot about the special honor tribute to the WWII Code Talkers. He personally designed three of the gold congressional medals that were awarded to the WWII Code Talkers and was able to join the Code Talkers for the special ceremony in Washington D.C.

So just who is Frank Kocian Morris, artist for the Flame of Liberty Memorial?

While many revere the notoriety of being selected as designer for the U.S. Mint, Mr. Morris has been selected by the U.S. Treasury, honored with the prestigious position of Master Designer. “To many, coins are just currency. To me, each is its own distinct piece of sculpture or three-dimensional art.” explained Frank Morris, who is responsible for creating designs for multiple American circulating coins, Congressional medals, and Presidential medals. His design selections by the U.S. Mint include three Congressional Gold Medals to honor the Native American Code Talkers of World War I & II (three of which are appear in the video accompanying this article), three Gold Collector Coins that honor First Ladies Caroline Harrison, Ellen Wilson & Grace Coolidge, and the George Rogers Clark coin in honor of a celebrated Revolutionary War hero.

A native of Memphis, Frank Morris trained, lived and worked in California and New York and returned to Memphis where he now resides. Many exceptional artists sport a solid foundation and Frank Morris is no exception. He began private training at an early age in the atelier of noted painter Paul Penczner. He then earned a fine arts degree with honors from the University of Memphis and continued his post baccalaureate studies at the prestigious Art Center College of Design in Los Angeles. Mr. Morris worked in New York City as an illustrator and designer and continued to perfect his craft at famous art schools, including The Art Students League and the New York Academy of Art. This wealth of professional experience and artistic training enabled Frank Morris to naturally evolve into one of the premier artists in America. And, as his career has progressed over time and his elevator ascended heights in his craft, he has responsibly passed on his knowledge to others by teaching at the School of Visual Arts in New York City, the Memphis College of Art and private lessons in his own Atelier.

And today, Silicon Valley veterans and first responders alike can feel positive about the fact that the Flame of Liberty Memorial which stands in honor of their courage, sacrifice and heroism, is a world-class memorial designed by a world class artist, which is just as it should be.